“I shout my name in the public places, No one seems to notice, No one understands...”The Invisible Man 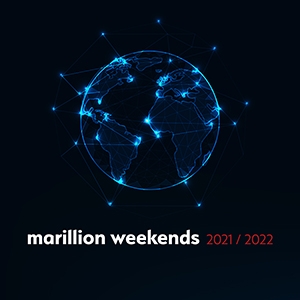 We hope you are all keeping safe and well as ever.

We thought it was time for us to make our announcements about the Marillion Weekends due to take place in 2021.

After many discussions, we have taken the painful decision to delay them until 2022 (with the exception of the UK - more on that later).

With so many fans travelling from all over the world to take part in these events, we decided that we should wait until life has settled down, airlines are flying again and, hopefully, the world is healthy.

To say we are disappointed is an understatement but it seems like the only sensible course of action.

2022 is also the 20th anniversary of our first ever Marillion Weekend so we will have plans to make them even bigger and better than ever!

All being well, we will hold them at Port Zelande, Lodz, Leicester, Stockholm. Montreal and Lisbon.

For 2021 we have decided to retain the Leicester Weekend that we have booked for 30th April - 2nd May as a kind of celebration.

We will reassess the situation next January with the De Montfort Hall and if we all feel it’s safe to proceed, then we will put the tickets on sale.

For those who would not be able to attend this, we will also look at live-streaming the whole event on a pay-per-view basis so that no one misses out.

Obviously the situation remains fluid and this is the best indication we can give for now.

We are talking with our agents and promoters about a possible run of gigs in October/November/December 2021 (which might coincide with the release of our new album - let’s see) and we will announce these shows as and when it's legal, do-able, and most of all, safe.

We hope that you understand the decisions that we have made and that things may still change.

In the meantime, as ever, stay safe, healthy and sane!