“The people here Full of love and comfortable in themselves, Not scared to let go...”Happiness is the Road 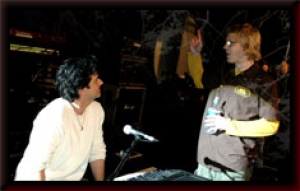 Good Morning Ladies and Gentlemen,
With less than a week to go to the Marillion Weekend 2005, we thought we'd just wish you all a safe journey if you're making the trip to come and see us play. For those of you coming from warmer climates, we should warn you that the UK is suffering from a cold spell at the moment so make sure you bring plenty of warm clothes (but failing that we'll have our nice warm jackets on sale!)
Speaking of which, you've been asking us some questions about new merchandise. At the warm up gig in Aylesbury we will be selling the new 'Wish You Were Here' 4-DVD set, the 'Popular Music' 2CD and unveiling our new Marillion Polo Shirts. The whole Racket Records catalogue will be available at the weekend, along with some great new items - all of which will be on sale through the website once we get back and unpack!
Pete's side project Kino have just released their new album 'Picture' - now available in a special limited edition CD + DVD package from Racket Records at www.marillion.com - and have announced a headline UK gig in London. The show will be on April 22nd at the Mean Fiddler, and tickets will be available soon from www.wayahead.com. Hope to see some of you there.
...and a final quick note to say that the Aylesbury show is an early one - we have no support act, and will try to start playing around 8:15. Because of the early stage time, doors will now open at the slightly earlier time of 7:00. Minehead, here we come...
Los Pentos Marillos