“Lie down in the flowers, In the blue of the air, Open your eyes, Why use up your life for anything else?”A Few Words for the Dead 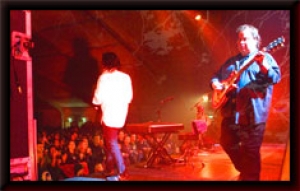 It's been a long time coming.
If you haven't been over to www.marillion.com in the last week, now's the time to check it out - we've had a make-over! The new-look website is now up and running, along with our new online forums. We're still adding more to the website as the year goes on, but couldn't wait any longer to show you - have a look and drop us a line to let us know what you think.
As part of the new website Racket Records is now offering more than just Marillion:
Released earlier this year is Richard Barbieri's first solo album 'Things Buried' - an instrumental album from the Porcupine Tree/ex-Japan synth wizard. Richard is also part of The h Band, and this album also features h Band (amongst others!) drummer Andy Gangadeen.
We expect Marillion fans will be aware of John Wesley from his numerous support slots on tours over the last 10 years. His first album was released on Racket Records back in 1994, and now Intact Records release his fifth studio effort 'Shiver'. Mixed by Porcupine Tree's Steven Wilson this is Wes's strongest album to date.
Our other Racket Records debut artist is Gazpacho, familiar faces and support act from the 2004 Marbles European tour and Marillion Weekend 2003. We're proud to release their brand new album 'Firebird' on Intact Records. In addition to the new album, Intact has also re-issued their previous albums 'Bravo' and 'When Earth Lets Go' - and all 3 are available at a special price for a limited time!
...and last but not least, over 20 years after its original release, the much-requested 'Recurring Dreams' by Steve Hogarth's pre-Marillion band the Europeans has now finally been issued on CD by Intact Records!
Full details of all these new releases are available at www.marillion.com/racket
Now it's off to the USA for our west-coast jaunt. Don't forget that tomorrow (yes, TOMORROW!) we're in Oxford for a warm-up show, and the last chance the UK will get to see Los Trios Marillos! There are still a handful of tickets left, so come down and join us; and US fans, tickets are also still available for all the shows, but they are also running low, so get them while you still can - you'll only kick yourself if you don't!
Head to www.marillion.com/tour for full dates, and see some of you very soon!