“Sweet or bitter in the memory, But an echo is all, all I can reach now...”Wrapped Up in Time 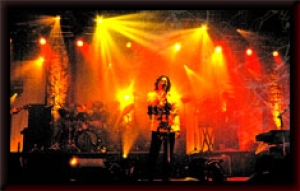 Hello all,
Well, last week we sent you an eWeb telling you that we were going to release a single early next year and that we'd like you to help us make the video. Since then things have changed.....
Here's what the plan WAS: We were going to release a single in January 2006 and hopefully get to Number One.
We have since had a talks with various people and here is the new improved plan!
We are still going to release a single but at a later date and follow it immediately with a brand new album. We decided that there was little point having a number one single if there was no album straight afterwards as we would have built momentum with nowhere to go!
So we would STILL like you to help make the video, but the deadline for submitting clips to us has been extended to the end of March 2006. Sorry if any of you have been rushing around filming to get this ready but please still send it to us.
So that's the plan as it stands at the moment. After the 'Not Quite Xmas Tour' we will get straight back into the studio to write some new songs (we have 5 finished already). We'll try and keep you updated and informed as we go along.
See you in November/December - and remember there are more shows available but they are selling fast, so.. Skates on! and we'll see you on the ice..
H, Pete, Ian, Steve and Mark